Beginning of July, the first wind tunnel test campaign in AEROFLEX WP3 was conducted at the FCA wind tunnel in Turin. The main purpose of this test was to provide data for validating the CFD simulations within the project. In addition to measuring the aerodynamic forces on the baseline model and the tested configurations, surface pressures on the model and velocity distributions near the vehicle were also recorded. A 1:3 scale model of the AEROFLEX baseline tractor semi-trailer combination was used in the test. NLR was responsible for design and manufacturing of the scale model and several other WP3 partners assisted with their input.

After some initial issues with the fine trimming of the rotating wheels, the test campaign turned out to be successful. CRF made an initial analysis of the test data during the summer, and the work will continue throughout September together with the partners that are active within Task 3.4.

The second test campaign is scheduled for December 2019, and will consist of PIV measurements, investigations on additional configuration changes and demonstration of Active Flow Control using plasma actuators. 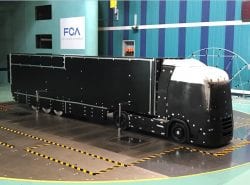